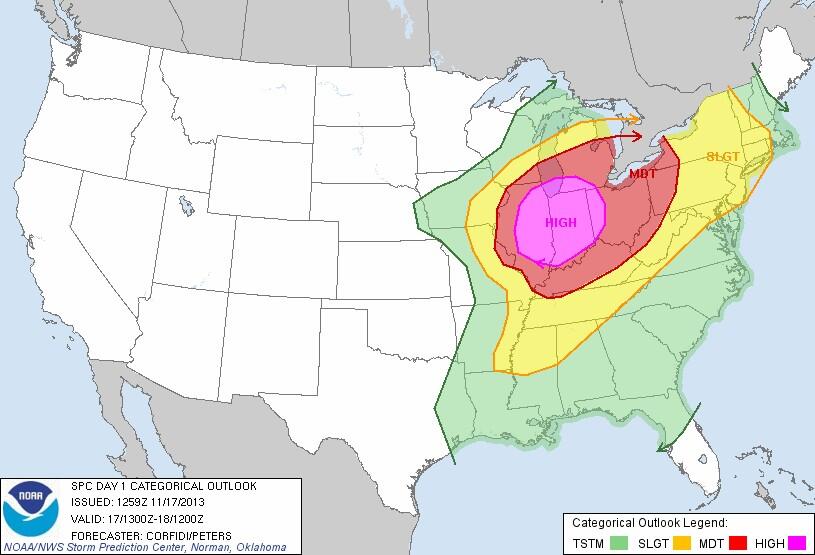 Be safe, everyone. The Weather Channel is on it.

I can feel this storm system in my bones and I’m nOT HAPPY ABOUT IT.

Oh yaaaaay look what I get to drive through on my way to a show todaaaaaaaay.

I get to drive from one end of high into the middle of it?  For a crappy birthday I don’t want to go to?  With 4 boys and a hubby that’s all pissy?

Be careful with this one! It’s late in the season for a tornado outbreak, but the SPC doesn’t break out that high-risk contour for just anything. The environment is primed for extremely fast-moving thunderstorms and long-track, long-lived major tornadoes (EF2+). If you’re within that “MDT” band, you’ve got about a 10% chance of seeing an EF2-EF5 tornado within 25 miles of you, which is the highest probability of significant tornadoes you can get. You’ve got a 30% chance of seeing any sort of tornado in that area, which is also incredibly high (remember how small tornadoes are, relatively speaking—these storms are likely to be cyclic and produce multiple tornadoes). Large hail is more likely to be a problem in Illinois than further east. Damaging non-tornadic winds are likely all the way out to central PA.

Keep in mind that a tornado watch is a heads-up to let you know that tornadic conditions are likely (ideally, they’re supposed to be issued at least 6 hours before a tornado hits), whereas a tornado warning means there is a tornado on the ground right now.

Contrary to a lot of the Great Plains, many of the regions under fire today have basements in most houses. If you get a tornado warning that covers your area, grab your family and pets and get as far underground as you can—failing that, keep as many walls between yourself and the outside as you can. If you have no basement, get in your bathtub and drag a mattress in with you to act as a shield. Treat the tornado like someone coming by to shoot up your house from the street, and take shelter accordingly: the debris is what you have to worry about.

Don’t waste time opening windows; it makes no difference. If you’re already in a car and can’t outrun the storm (moving at right angles to the tornado if it’s on the ground), get out of the car and flatten yourself in a ditch. These storms are fast-moving, so the odds of flooding are lower than they would be otherwise, and keeping low reduces your odds of being hit by debris. Make sure your car isn’t blocking traffic. Stay the hell away from highway underpasses/overpasses.

If you’re at home and a tornado warning hits DO NOT FUCKING LEAVE YOUR HOME. Don’t get in your car and try to outrun the storm. I don’t care what the TV meteorologist is telling you to do. They’re not trained for this sort of situation. Exactly that sort of exodus, prompted by a TV announcement, happened in Oklahoma this past May and the resulting traffic jam resulted in many deaths. You should also avoid large, open spaces like school gyms as shelter.

Don’t stormchase. Don’t gawk. There are lots of major cities in the path of this system, and the more people there are on the road, the harder it’ll be for emergency vehicles to do their thing.

If you have any questions, throw them my way. I do this for a living. In the meantime, watch this page for updates. There are already several tornadic storms on the ground, moving at about 65 mph.

I note that despite the American map depicting everything south of Toronto (which includes me) as red-zone, Environment Canada’s alerts make no mention of tornadoes. I’ll keep an eye on it: if they change their mind, I can always go cower in my basement.

This site uses Akismet to reduce spam. Learn how your comment data is processed.