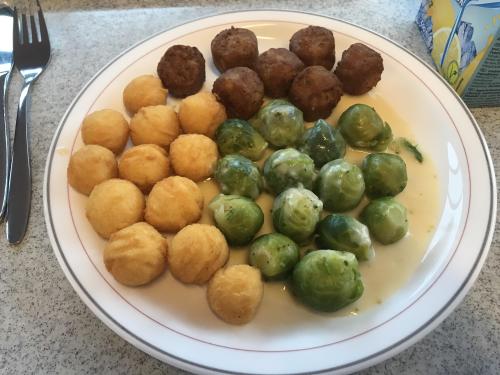 when i was a child my dad made up a fake holiday called big sandwich night the weekend after thanksgiving, during which we got the longest bread we could find and built a big sandwich together and then cut it up and ate it. we got really fancy ingredients and each built our own section of sandwich before cutting it. building the sandwich together represents community or teamwork or something. and then we would put our christmas tree up and the holiday season was officially kicked off with big sandwich night.

i grew up believing this was a real holiday that americans everywhere celebrated until when i was like 8 i asked a friend if they were excited for big sandwich night and they were like what the hell are you talking about riley. kind of shattered my worldview. but we still celebrate it and ive spread the tradition to friends and partners.

big sandwiches of years past:

as weve included more people weve started having to graft loaves together to make a sandwich big enough for everyone. but it still communicates the core idea of everyone eating the same sandwich together in fellowship.

This is a good holiday tradition.

So there’s this company in the UK, right. They brand themselves on producing fancy free range eggs and as part of that they have breed information written on the carton.

I did some snooping and found that every miracle news story of a supermarket egg hatching in the UK traced back to duck eggs, specifically the Braddock White duck eggs produced by this one company for the supermarket Waitrose.

And one day my mum brings them home and says “I bought these to eat but aren’t they the ones that hatch?”

And it’s spring and I’m hatching a ton this year so in they went.

On candling we had three fertile eggs! That’s a fertility of 50% – the same as shipped eggs from a breeder!

Hatch day comes and we get 2 ducklings, Curie and Becquerel. Sadly, Curie contracts duck septicaemia from an infected navel and doesn’t make it, but Becquerel is a healthy bird and growing like a weed.

I had put 4 breeder eggs in a week after them in case just one hatched, so Becque now has two Khaki Campbell cross friends called Tsuki and Hoshi so she isn’t lonely.

And as of today’s 7am Quacking – Becque is a female! Which means she’s capable of laying eggs and therefore I have pirated a duck.

#food #ducks #adorable #death tw? #fun with loopholes #anything that makes me laugh this much deserves a reblog #(I did laugh at the ”pirated a duck” line‚ but‚ like‚ they *did* pay for the egg) #(I guess it’s more like DRM stripping)

Ive reblogged so many posts about Glass Onion that tumblr thinks I’m really into onions. It’s recommended me an oil painting of onions and gifs from a documentary about garlic. Thickest algorithm in the world please never make it smarter

@onionpainter u notice an uptick recently or

… is THAT why there’s been a surge in alliumposting?!

glass onion was good but so are all the other onions. all alliumposting is valid

#food #Tumblr: a User’s Guide #I didn’t actually laugh aloud but it still amused me enough to reblog #Glass Onion #(which FTR I have not seen)

You put ice cream in a glass and pour soft drink over it. It creates a thick layer of delicious foam on top of a sweet, creamy drink with ice cream in it.

And yes I did attempt to get a picture by googling “Australia spider” like a fucking moron.

I hesitate to ask, but as someone who knows that sort of drink as a “float” because the ice cream floats, why is it called a spider?

According to wikipedia it’s because the reaction that makes the foam layer is reminiscent of a spider’s web. I don’t see it, but sure.

hold on, is this where we’ve been going wrong the whole time?
is Spiders Georg just really into icecream floats?

Spiders Georg out there pioneering previously-undiscovered levels of brain freeze

#we’re not here to fuck spiders because that would give us horrible yeast infections #language #food #Australia #Spiders Georg #embarrassment squick? #illness mention #the more you know

What are the pros?

As of November 9th 2022, the CDC is telling anyone with a weakened immune system, over 65, or who is pregnant to not eat any meat or cheese from deli counters anywhere in the country.

You are at higher risk for severe Listeria illness if you are pregnant, aged 65 or older, or have a weakened immune system due to certain medical conditions or treatments. If you are in any of these groups, do not eat meat or cheese from any deli counter, unless it is reheated to an internal temperature of 165°F or until steaming hot.

There have been 16 illnesses traced so far- 13 hospitalizations, 1 death. Illnesses have been clustered around New York State but have also appeared in California and Illinois. As always the true number of illnesses is certainly much larger.

Note that bit about “unless it is reheated to an internal temperature of 165°F”. Basically, treat deli meat as if it were raw: be careful what it touches until it’s been thoroughly cooked.

And, frankly, that goes for all risk groups: if you’re in a low-risk demographic listeria is unlikely to *kill* you (or even require you to navigate an already overwhelmed hospital system), but food poisoning is still well worth avoiding.

#PSA #home of the brave #food #poison cw #illness tw #death tw? #reply via reblog #(that’s not even counting the possibility that you might not *be* in a low-risk demographic anymore) #(I suspect there’s a lot of people out there with COVID-sequela immune dysregulation who don’t realise it yet)

think they’re wrong. it tastes initially multivitamin-tablet bland, sure, but then quickly starts to get bitter and slightly tangy, with a polymeric note before I spat it out

What chalk did you try? I wonder if hagoromo tastes better than competitors.

it was Hagoromo. fortunately, my department provides free Crayola chalk for people with low standards and the category of things I’ll put in my mouth for the bit is large. the Crayola chalk is mainly just bland, like multivitamins but moreso, with a slight bitterness that develops after a while, but none of the tang or plasticky taste of Hagoromo. it’s a much less intense experience. further, Crayola doesn’t have that same melt-in-the-mouth texture that mathematicians the world over crave

and then i checked their names

they’re all NAmED aftER fOOD

WHY WOULD THEY DO THIS

i was curious (and kinda hoped that kevin was like, the manager of the whole foods) so i googled it and:

RUTABAGA. THE POLL ONE IS RUTABAGA NOT KEVIN.